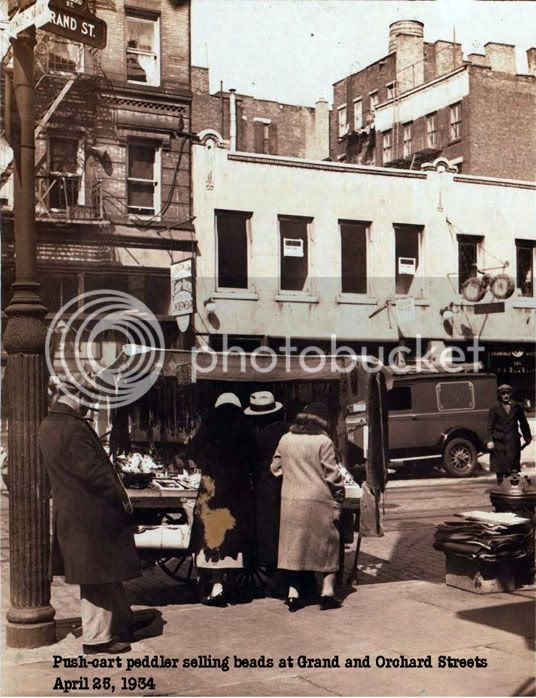 An email I received from Bernie Dolnansky:

ECKSTEIN--Herbert, died peacefully at home in Great Neck at the age of 87 on October 27, 2009. Beloved husband of Nadine for 56 years; devoted father of Kenneth, Linda and Myra Mogilner; cherished father-in-law of Ruthann Eckstein and Dr. Alon Mogilner; adored grandfather of Max, Sam, Shoshana, Josh, Zack, Joey and Gabi; much loved brother of David, Eugene and Barbara Shostak. During his lifetime he was proprietor of H. Eckstein & Sons, a dry goods store and Lower East Side institution. He will be sorely missed.

I believe that's Eckstein's store window showing on Grand Street on the left of the picture above. I fondly recall my trips to Eckstein's with my mother. The basement at Eckstein's was a world unto itself and there was always interesting back and forth sales talk/flirting going on between my mother and the salesmen.

An excerpt from a 2004 nytimes article about Eckstein's

Trendiness Among the Tenements; Descendants Return to a Remade Lower East Side
By JOSEPH BERGER

H. Eckstein & Sons was not quite as much a fixture of the Lower East Side as Guss's Pickles or Yonah Schimmel Knish Bakery. Still, Brenda Zimmer spent much of her life there, haggling with customers in the cramped and hectic clothing store on Orchard Street that her family owned, hanging on until a greatly weakened Eckstein's finally shut its doors in 1998.

Yet when she told friends a few years ago that her daughter, Amy, was moving into one of the neighborhood's storied tenements, ''they looked a little shocked,'' she said.
''Everybody spent their lives trying to get out of there, and my daughter is trying to come back,'' Mrs. Zimmer said, recalling her friends' puzzlement and suggesting more than a little of her own.

The rapid changes in a neighborhood famous as the squalid foothold for immigrants just off the boat have produced more than a few such expressions of astonishment.
There are still many people around who were glad to escape the neighborhood when the old life seemed to be seeping out of it more than a half-century ago. Some of them are now wonderstruck as their adventurous children and grandchildren are returning.

On a recent stroll from Hester Street to Houston Street with Amy, Mrs. Zimmer seemed tickled that her daughter, a 28-year-old Yale graduate and freelance writer, had actually settled a few blocks from where Amy's grandfather was born and where Mrs. Zimmer worked full time for 15 years. Sure, only a handful of the wholesale and retail stores that sold hosiery, linens, lingerie, and handbags were still around, and even many of the bodegas of a more recent era of migration were gone. But the neighborhood had once again quickened to life, something closer to the bustle of the days when the walk-up tenements were teeming and the dowdy stores drew shoppers from all over for their Sunday bargains.

''Now it's exciting; it's prestigious to live there,'' Mrs. Zimmer, a high-spirited woman, observed.

Dry-goods shops are being replaced by restaurants with $30 entrees; by boutiques where the tastefully spaced wares are fashionably retro but the prices are decidedly nouveau; by galleries like Fusion-Arts Museum, which exhibits a robotlike ''fusion golem'' made of motorized hardware; by cafes where young people peck at laptops while sipping lattes; and even by one shop, Toys in Babeland, that, to Mrs. Zimmer's embarrassed amusement, sells sex toys.

A link to another article by Amy Zimmer about Eckstein's
Posted by Unknown at 4:24 AM