EVHP director to participate in panel on East Village

The panel is a part of Metropolitan's East Village Theater Festival, a three-week celebration of the changing culture of the East Village. Combining two of the theater’s annual new works series and featuring the work of local artists and musicians, the festival will be held every day of the week in Metropolitan’s home at 220 E 4th Street August 3rd through 23rd, 2009.

More info on event and festival: metropolitanplayhouse.org
Posted by Unknown at 6:02 PM 1 comment:

The East Village History Project (EVHP) team was able to participate in the New Museum Block Party on Sunday, July 26, at Sara D. Roosevelt Park in the Lower East Side.

At our table we provided information about the various walking tours that we offer at the East Village Visitors Center. 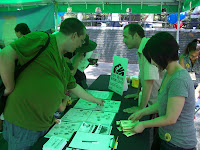 We also had a fantastic time with our visitors by playing our famous "Guess the Great and the Famous of the East Village" game. On 5 panels, we displayed pictures of famous people divided into different categories such as: artists and musicians, anarchists, or gangsters, which were all
in someway significant to the East Village. Those of our visitors who were able to name 5 people on these panels won an "East Village Visitors Center History Bar", a chocolate bar, affectionately designed by Andrea Coyle, Director of Outreach.

Despite the heat and humidity it was loads of fun, and we are thrilled we were able to be apart of it!
We encourage you to stop by for at least a coffee. Visit our web page for more info about our upcoming events and walking tours.
-Ina & the East Village History Project Team

East Village History Project is a proud partner of the Orensanz Summer Museum on Governor's Island this Summer 2009.

We encourage art lovers and adventurers to take the 10 minute ferry departing from South Manhattan (or Brooklyn) and make a pleasant promenade to the Island, where you can enjoy the specially curated drawings, light boxes and external sculptures created specifically for the occasion as well as workshops and debates covering a wide range of disciplines.

The exhibition is open every weekend from June 14th to October 3rd, and together with other cultural activities programmed on the Island, the Orensanz Summer Museum's aim is to make of this tiny island in the heart of New York’s Bay a new cultural reference for the city’s summer artistic scenario.

Thomas Greene Wiggins (1849-1908) was a former slave and indentured servant who began playing piano by the age of four and became one of the most celebrated musicians of the Civil War era.

Thomas was born autistic and without sight on May 25, 1849 to Mungo and Charity Wiggins, two Georgia plantation slaves owned by Wiley Edward Jones. His family was sold soon after to Colonel James Neil Bethune, and Tom was "thrown in as a bargain." By all accounts, because of his disabilities, Thomas was treated like a "household pet," but Bethune's daughter Mary recognized talent in the young boy and became his first music teacher. Thomas learned fast and began performing publicly by the age of eight.

By 1858, at the age of nine, Thomas was basically rented out by the Bethune family to Perry Oliver, who booked performances for Thomas all over the South, promoted as the "Musical Prodigy of the Age: a Plantation Negro Boy." Bethune received $15,000 for the three-year contract, which, as a slave, Thomas saw no part of.

Thomas Wiggins continued to astound audiences and performed many high-profile events, including a concert before President James Buchanan in 1859, becoming the first African-American to ever perform at the White House.

In 1864, James Bethune, sensing a Union victory in the Civil War (and an end to slavery), protected his investment by convincing Mingo and Charity to sign an indenture agreement for Tom's services. Under contract, Tom's parents were to receive "a good home and subsistence and $500 a year". Sixteen year old Thomas was promised "$20 per month and two percent of the net proceeds of his services".

Over the next few years, Thomas was touring all over the United States and Europe. He was being managed by John C. Bethune, who was earning as much as $50,000 a year from the performances. It was a rigorous schedule, but Thomas the respect of professional musicians the world over.

John G. Bethune had himself appointed Thomas's legal guardian on July 25, 1870, and soon moved to New York City to live with his new new wife, the owner of the boarding house where they lived (7 St. Marks Place).

Over the following nine years, while living here on St. Marks Place, Thomas Wiggins studied music with Professor Joseph Poznanski, who wrote down and collected many of Thomas' original compositions.

In 1865, a custody battle broke out when Charity Wiggins filed a suit against the Bethunes for the return of her son and a fair share of profits. John Bethune was killed in 1887 while trying to board a local train, but his widow, Eliza, ended up winning the long and bizarre custody battle later that year.

Thomas' last public appearances were between April 17-22, 1905 in Boston and little was heard from him again until his death at age 59 on June 13, 1908. Thomas Wiggins died of natural causes in the new home of Eliza Bethune in Hoboken, NJ, his memorial was held at the Frank E. Campbell funeral chapel at 241 W.23rd Street.

Email ThisBlogThis!Share to TwitterShare to FacebookShare to Pinterest
Labels: history
Newer Posts Older Posts Home
Subscribe to: Posts (Atom)
View my complete profile
LESHP is an award-winning non-profit dedicated to researching and preserving the history of NYC's Lower East Side.